The TAG Heuer Formula 1 was born in 1986 on the heels of a revolution.

The quartz crisis of the 1970s and 80s was coming to an end, and Techniques d'Avant Garde had recently purchased Heuer.

This Heuer Formula line was the Swiss company's first watch since the acquisition.

While the watch had historic aesthetic and functional appeal, it was also successful because of the brand's intimate ties with Formula 1 racing.

It bore a collaboration unlike anything Heuer or TAG had ever done before and remains a consistent part of the company's collection.

Before examining the current TAG Formula 1 watch line up, let's look at the larger picture.

What Is a TAG Heuer Formula 1?

The TAG Heuer Formula 1 has a unique place in company history. The line began as a way to distinguish TAG Heuer from its fellow Swiss competitor, the Swatch. The company adopted and elaborated on many of the same mechanisms — bright colors, efficient movements, and synthetic cases —and became a resounding success.

What made the TAG F1 watch unique is its blend of commercial and cutting-edge appeal. All the Heuer Formula models use state-of-the-art quartz movement (until recently) for maximum precision. The modern design, sleek materials, and bold color palette also made the TAG Heuer Formula 1 Quartz watch stand out from the competition.

TAG Heuer F1 watches don't remain static, though. The company has continuously updated its watches beyond mechanical to quartz movement. It also added the chronograph for racing aficionados in subsequent years and fiberglass dial cover for clarity and durability.

Today, TAG Heuer Formula sells a variety of high-end watches. That includes quartz and automatic movement models. There are also individual variations in the crown, hands, bezel, and other features to ensure complete comfort and functionality for users. A majority of watches come in black dial, blue dial, and stainless steel.

The birth of TAG Heuer Formula 1 coincided with a shift towards quartz movements. This new approach provided increased accuracy and convenience over competing mechanical watches. Since the release of Formula 1 quartz watches, TAG Heuer has never made an automatic model. 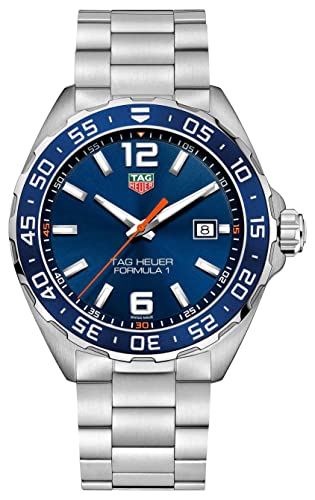 Current versions of Formula 1 Quartz combine sporty and stylish appeal at an affordable price. Take the TAG Heuer Formula 1 Blue Dial Chronograph and Watch, for instance. The blue dial model is the same price it was a decade ago and comes with a polished finish along with the case, bezel, hour and minute hands, crown, steel bracelet, and pushers for an unmistakable stainless steel sheen. There are even markers that have a one-tenth of a second dial and an hour dial on the same dark blue display.

The Tag Heuer Calibre 16 Formula 1 luxury watch was a sudden departure from the company's previous models. The Calibre 16 is part of the fifth series of Formula 1 watches and is the first to feature automatic movement. The self-winding watch harnesses the kinetic energy of the wearer's wrist strap for movement without battery power. 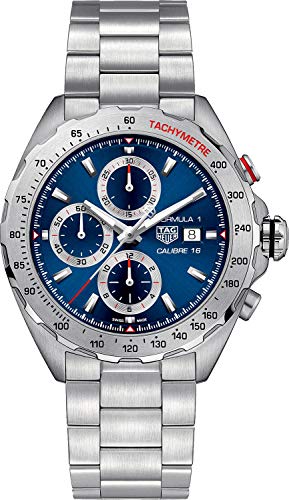 Calibre 16 stacks up favorably against other models in the TAG Heuer collection. Part of that appeal is the makeover. The watch has clean iconography along the chronograph with red highlights against a black or blue dial background. The redesign also draws inspired from the display of the company's Autavia with its stainless-steel bezel and strap and three embossed black sub-dials.

The TAG Heuer automatic movement includes the Calibre 5 too. The three-handed watch offers an aura of sophistication with a striking bezel, minimalist hour markers and hands, seamless finish, and retro-inspirations. It also features a second hand with a red tip that offers a throwback to traditional models. 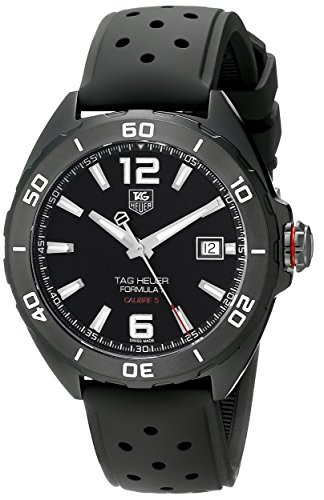 What sets this watch apart is its durability. The black stainless steel exterior of Heuer Formula provides strength and reliability, whether you are at home, in the office, or on the hiking trails. Plus, it is highly water resistant, so you can have peace of mind knowing you will never have to sacrifice accuracy.

TAG Heuer brand has made a name for itself with the quality of their Formula 1 watches. While the quality ranges between models, there are some consistent takeaways. Let's take the TAG Heuer Formula 1 Chronograph Blue Steel watch, for example.

For starters, the aesthetic of this watch, like other TAG Heuer products such as the Aquaracer, is undeniably slick. The face draws its color palette from Porsche's Ossi Blue vehicles. This deep blue hue provides a defining contrast with the polished steel hour markers and hands, case, stainless steel bracelet and crisp white text.

The 43 mm diameter also features a three-dial setup with choreographed precision when it comes to measuring hours, minutes, and seconds. Behind the dial, there are Swiss-made quartz parts for offer corrective and chronographic functions. Additionally, there is a TAG Heuer tachymeter Formula 1 for individuals who enjoy spending their free time at the racetrack.

There are many reasons why these watches command the adoration of millions of people. They are equal parts functional and fashionable without sacrificing exactness of measurement. Plus, the stainless steel and fiberglass components come together to form a product that is durable enough to withstand any elements.

How Long Will a TAG Heuer Automatic Watch Last?

Here is the short answer: for decades. Proper care and maintenance of an automatic model can keep a TAG Heuer Formula watch running from one generation to the next. That's why many people pass down their watches through the years, and they become family heirlooms.

The long answer requires a look into the mechanism of mechanical watch movements. These versions operate because of the continuous motion of the wearer's wrist. Think of the strap as the beating heart for the watch with each human motion providing the necessary energy for its hour hands to move.

The watch interior features a rotor and weights that coordinate to vibrate six to eight times per second. This setup requires meticulous precision during the manufacturing and certification process to ensure complete accuracy. It also functions in a way that comes with a two-day power reserve, so it will work even when unworn.

All of this engineering combines for a watch that runs almost on perpetual motion. The fluidity and ease of the automation minimize wear and tear compared to quartz watches. TAG Heuer does recommend biannual maintenance and water resistance checkups to ensure it functions in perpetuity.

Note that quartz models don't last as long as automatic ones. The shorter life expectancy is due to the risks of battery leakage and moisture seeping in through cracks along the crown or dial. Formula 1's with quartz movement typically last two decades or more, if well-maintained.

How to Set the Time on a TAG Heuer Formula 1?

The first step is to ensure the crown is correctly screwed in for water-resistance. Then, manually turn the crown clockwise to wind it. According to the model, pull the crown out and continue to turn it clockwise to advance the date. Turning it counterclockwise will change the day.

The crown should be even further out to set the local time. Once you finished setting the time, always push the crown back to its original position before screwing it down completely. For complete instructions on setting the time and date, check out the official TAG Heuer manual.

How Much Is a TAG Heuer Formula 1 Watch?

The price tag depends entirely on the model you buy. For instance, a TAG Heuer Chronograph Formula 1 luxury watch currently retails anywhere from $1,400 to $3,200 price tag. That said, TAG Heuer watches are typically a minimum of $1,000 with the highest-end version costing north of $5,000.

Because the TAG Heuer Formula 1 Chronograph commands a sizeable market value, there are many imitations around claiming to be the real thing. While it is possible to find a Formula 1 sale in the mid to upper hundreds, be wary of anything retailing in the low triple digits. Make sure when you purchase a TAG Heuer watch to do so directly from the store or a trusted provider that offers guaranteed authenticity.

Do TAG Watches Use Batteries?

Yes and no. Whether the watch has a battery depends on the model. For instance, automatic and mechanical watches don't require an internal power source. On the other hand, quartz watches contain a battery and use an electric current to create oscillations that generate movement.

There are a couple of ways to distinguish a quartz model from its non-battery powered counterparts. One discrepancy is the logo. The Formula 1 Quartz uses green and red from the company branding, while automatic versions use white. Here are some other differences between the two: