The Rolex Air-King, introduced in 1945, has a storied history.

It was part of the Air Series of watches that included the Air-Lion, Air-Tiger, and Air-Giant created to honor the British Royal Air Force pilots of World War II and became the aviation watch of choice for pilots over the years.

This review briefly discusses the history and features of the Rolex Air-King and compares two of the classic references to the current line of available Air-King watches.

We’ll also discuss the value of owning an Air-King and provide answers to some frequently asked questions.

This critique will focus on three of the brand’s bestselling models: references 5500, 14000, and the newest model reference 116900.

All three models of the classic line have their unique aspects that have captured the imaginations of luxury watch enthusiasts for decades.

Horology enthusiasts looking for a Rolex at an excellent price should give some consideration to the Rolex Air-King watches.

Their clean lines, classic, simple styling, and time-tested readable design are all hallmarks of a brand with deep roots in aviation’s history.

Rolex reintroduced the Air-King, reference 116900, in 2016, two years after being discontinued. The Rolex Air-King 116900 was a complete redesign of the dial and case. Notwithstanding several improvements and because of several changes from the classic editions, the 116900 is considered by some horology enthusiasts to be a completely new model.

The Rolex Air King 116900 comes in the same 40mm case as the Milgauss model, including magnetic shielding, but Rolex replaced the simple dial designs of previous Air-King editions with the distinct, highly readable black dial of the 116900. The prominent 3, 6, 9, Arabic numerals and a minute scale for navigational time notation stand out against the black background.

The Rolex 116900 also features a highly visible Chromalight display for easy reading in dark conditions. Reference 116900 is similar in some ways to the Rolex Milgauss. Both watches use the caliber 3131 movement with electromagnetic shielding.

While some horology enthusiasts resist the stark visual departure of the dial on the 116900 compared to previous references, some embrace the fresh new look and see the opportunity to own a Milgauss-like Rolex at a fraction of the price.

The Rolex 116900 dial is much busier than previous models, with Arabic numerals at positions 3, 6, and 9, and on the minute scale. The signature crown logo, brand name, and the Air-King line in the classic font are included among other branding text, too.

Still, from a value perspective, the new Rolex Air King is a worthy candidate for an entry-level Rolex. The price is $6,200 in 2020, and the Rolex 116900 has been around long enough for good specimens to appear on the reseller market, too. 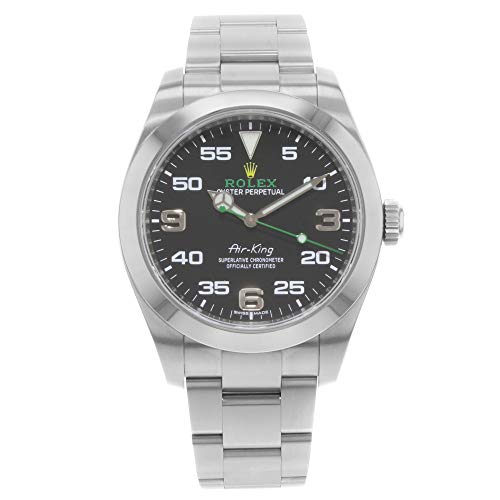 The Rolex Air-King 5500 is the real classic in our lineup. It has a minimalist dial, with bar markers, no numerals, and little text. It’s all-steel construction and clean lines make this time-only watch a favorite among horology enthusiasts. 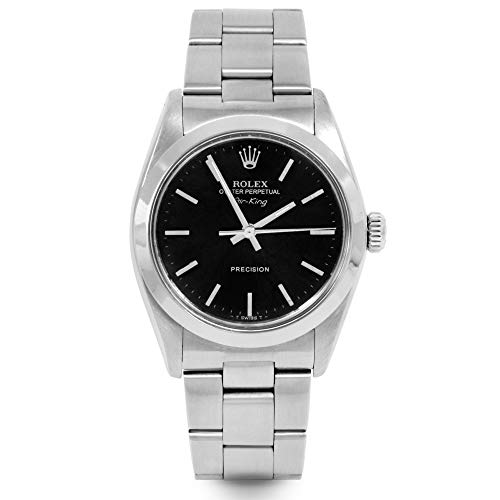 The Rolex Air-King 14000 debuted in 1989 as the long-awaited replacement for reference 5500. The 14000 added a sapphire crystal and caliber 3000 movement with no complications to the Air-King. Reference 14000 has a 34mm stainless steel case and stainless-steel Oyster bracelet.

While it only had a short run, the reference 14000 Rolex Air-King introduced some long-awaited updates and variations to the Air-King line at a time when other Rolex watches offered numerous color and style options. The 14000 gave the Air-King new life after a very long run with few changes and variations in style from which to choose. 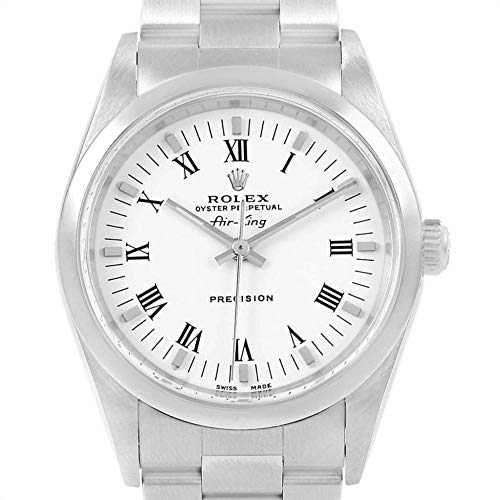 If you’re comparing the Rolex Air-King reference 116900 with references 5500 and 14000, there’s a lot of Rolex history to take in, and numerous changes to the classic model to consider. Air-King watches remained unchanged for almost 40 years with reference 5500.

Reference 14000 introduced newer movements and a greater variety of dial selections. Air-King 116900, the latest reference after Rolex temporarily discontinued the model, has all the most recent updates in the case size and composition, movement, bracelet, dial, and presentation.

It’s almost like comparing different models altogether. Late in its life, the 14000 series received some pricey upgrades, including an 18k gold fluted bezel, the newest bracelet, and COSC-certified movement.

The addition of numerous colors, Roman or Arabic numerals, and multiple bezel styles to reference 14000 and its variants made it a sharply different watch compared to its predecessor the 5500, which remained little changed in 37 years of production.

Reference 116900, introduced in 2016, ushered in some of the most significant changes to the Air-King in decades. The Air-King borrows the 40mm anti-magnetic Oyster steel case from the Rolex Milgauss - larger and thicker than its 34mm predecessors. The Mercedes-style hands like the Submariner were another new addition.

The dial of reference 116900 is the most significant change from the classic Air-Kings of the past. The Maxi dial with the large 3, 6, 9 in white gold, combined with the Arabic-numbered minute scale, is a sharp contrast to the clean, simple designs of past editions. The crown logo and five lines of text make the dial a little more busy than prior models, too.

Which model is right for you? Each of these watches has its combination of style, features, and price, so personal tastes will be a significant part of your decision-making.

Why the Air-King Offers a Great Bang for Your Buck

The Rolex Air-King 116900 offers a lot of value for the money. Slightly more substantial than the Rolex Explorer and housed in the same anti-magnetic case as the Milgauss model, it shares some of the best Rolex design attributes of both other watches, but costs significantly less.

Air-King may not have the same cache or notoriety as watches like the Submariner or the GMT-Master II, but then you won’t end up paying a small fortune to own one. Air-King has cool retro features, even in the most recent edition, that make it stylistically as well as financially appealing to horology enthusiasts.

How Much is a Rolex Air-King?

A Rolex Air-King lists for $6,200 on Rolex.com, but you'll find better offers on Amazon. Prices on the secondary market for vintage or used Rolex Air-King watches range from about $2,800 to $4,000. The cost will vary depending on the vintage, condition, and relative rarity of the watch.

Is the Rolex Air-King Discontinued?

Rolex briefly discontinued Air-King watches in 2014. The reference in production at the time was the 14000 and its variants. Production resumed for the Rolex Air-King in 2016 with the introduction of Air-King reference 116900.

Does the Rolex Air-King Hold Value?

Rolex’s Air-King has a storied past, and its vintage and rare editions hold their value over time. Supply and demand are always a factor when determining value, and the Rolex Air-King line of watches—particularly the more contemporary models—are not in short supply.

However, the Air-King is still a Rolex, and the brand cache applies to this model as well. Consult with a professional if you have questions about the brand and whether the Air-King line is the right choice for your watch investment.

Is the Rolex Air-King a Sports Watch?

The Rolex Air-King is a steel sports watch that performs well in outdoor conditions, including diving to a limited depth. However, the Air-King originally was designed as a watch for pilots, and the newest edition retains the aviation-centric design elements.

The Rolex Air-King is a classic for the brand and has its roots in aviation history. Using the time-honored Oyster Perpetual design, the Rolex Air-King was created to honor the aviators who fought bravely over the skies of Great Britain during World War II.

The classic Rolex reference 5500 with its simple design, clean, uncluttered dial, and time-only movement was the standard for 37 years. Introducing the 14000 enabled Rolex to bring some long-anticipated dial changes and updated movements. The 2016 reference 116900 brings a new design that shares some attributes of the Rolex Explorer and Milgauss, but at a fraction of the price.

For those who favor vintage or unusual variations of Rolex watches, reference 14000 has numerous dial combinations that can make finding the specific variant you want a real treasure hunt. However, the reward of finding just the right Air-King for your collection makes it time and effort well spent.

The comparably sized 39mm Oyster is the lowest entry point for a new Rolex, and it strongly resembles the classic Air-King 5500. The Oyster received its latest update just before the Air-King 116900 product re-launch. Individual tastes will vary, but the Air-King in the references reviewed here represent strong contenders as a first entry-level luxury watch or the newest addition to your collection.

The Rolex Air-King is the only watch from the fabled Air series to remain in production. Its aesthetics, precise construction, and enduring style make it one of the long-standing product lines for the brand. Your choices for an entry-level Rolex—especially a new one—are limited. The Rolex Air-King remains an excellent choice for a first Rolex and an icon for the luxury brand.