TAG Heuer owns a unique niche in the watch industry.

It is one of the few high-end retailer brands that actively markets its products towards action sports users.

Whether you're bound to the race track or the sea, TAG Heuer takes pride in manufacturing watches for the most rugged occasions.

Not only is TAG Heuer meticulous about the precision of its timing and movement mechanisms, or the material for its steel bracelet but also its security.

The company even patented the first water-resistant watch case in 1895.

Today, that ingenuity lives in on in the Aquaracer range of watches.

What Is the TAG Heuer Aquaracer?

TAG Heuer brand puts its watches through the gauntlet [R] to ensure they last the test of time and nature.

TAG Heuer runs tests, including depth tests up to 500 meters, humidity of 93 percent, and 14 days of exposure to sweat.

The watch still hasn't cracked under the pressure.

They designed the watch specifically for sea lovers. That includes surfers, swimmers, and deep divers alike. For instance, the handiness of the watch allows users to accurately modulate time interval even while wearing diving gloves. It also comes with green and blue luminescent for easy readability of the bevel and hands.

The TAG Heuer Aquaracer series does more than look the part, though. The cases come in ceramic, titanium, and stainless steel for complete water-resistance and shock-endurance. The combination of lightweight and heavy-duty reliability ensures resistance to high-pressure and abrasive scratches.

Perhaps the most important feature, though, is the TAG Heuer Aquaracer automatic movement. Calibre 5 functionality guarantees efficiency and precision that last a lifetime. That includes a wrist-powered 28.8 vibrations per hour with an additional 38 hours of reserve energy.

The bold design of the TAG Heuer Aquaracer 300m series serves it well under water. As a dive watch, the striking components create a highly functional and readable display. Even when dives foray into darkness or high-pressure situations, the robust features will endure. 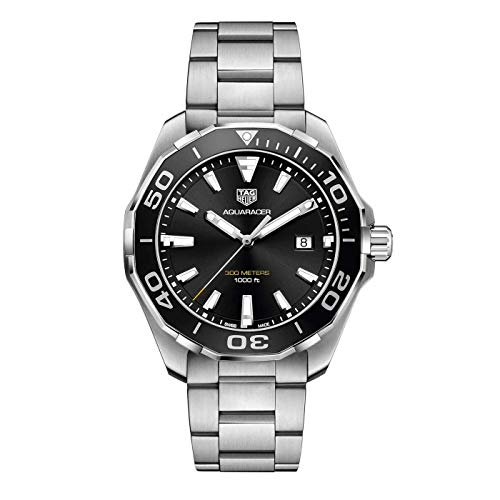 You'll immediately notice the heft of the TAG Heuer Aquaracer 300m. This model is significantly heavier than other dive watches, such as the Rolex Submariner. While weight doesn't necessarily equate to functionality, in this case, the extra ounces are TAG Heuer's reinforcement.

The Aquaracer 300m features many of the same features as its Calibre 5 brethren. That includes polished stainless steel case, a unidirectional ceramic bezel, blue or black dial option, a steel screwed-in crown, and sapphire with anti-reflective treatment. What makes separates the two is the movement.

The Aquaracer 300m Quartz has, you guessed it, quartz movement. This mechanism or movement utilizes internal battery power reserve to operate the watch as opposed to manual setting. While this feature allows for greater precision and less maintenance, quartz movement watches often don't have the same perpetual lifespan of automatic models.

The TAG Heuer Calibre 5 Automatic Watch is a dive watch on steroids. It is audacious and dense with bold bezel angles and bezel numerals. The 42 mm diameter and 15 mm including the bezel mean the watch would stand out unabashedly against formal attire. It also comes in blue dial if you prefer a different color from the black one. 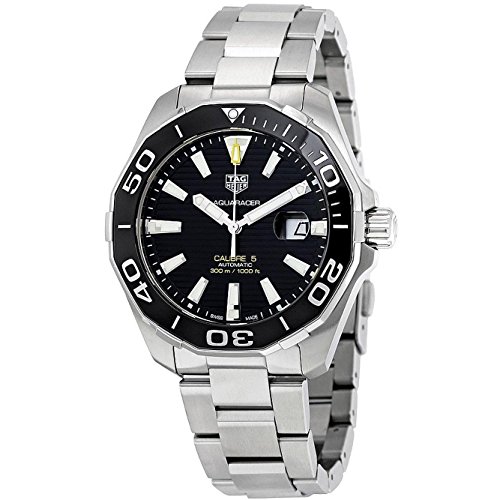 Take the dials, for instance. The horizontal stripe features three sub-dials, each with clean black and white numerals and markers. Each one has thin concentric rings to help the hands stand out against the navy blue background while adding a touch of flare.

Meanwhile, thick markers jut out at 12, 3, 6, and 9-o'clock with longer sub-markers ensure visual balance. The markers are more than an aesthetic touch. The different lengths make the watch easier to read on a dark dive where users must rely on self-generated luminescence.

Part of the legibility is attributable to the baton hands. The polished stainless steel hour and minute hands match the look of the primary hour markers. The complimentary look keeps the display from being overwhelming.

Perhaps the most distinguishing feature is the 12-sided bezel. The angular appearance of the bezel comes with a brushed steel finish and bold numerals at the 10-, 20-, 30-, 40-, and 50-minute positions. As the defining feature, the bezel serves a forewarning that the Aquaracer could back up its looks with performance.

All your questions answered.

How Much Is a TAG Heuer Aquaracer?

The price point depends on the model of Aquaracer. For instance, the TAG Aquaracer 300m currently retails for around $1,550. Meanwhile, some TAG Heuer Aquaracer Calibre 5 models go for closer to $2,500 with the Aquaracer Carbon commanding close to $4,000. Note that these prices are subject to change without notice.

It is also worth mentioning that the watchmaker is known as a high-end watch brand, and by default, is subject to knockoffs. Most of their watches will retail between $1,000 and $5,000. While some sales may knock the price under $1,000, shoppers should be wary of the authentic for prices in the low triple digits.

How to Set the Time on a TAG Heuer Aquaracer?

When setting the time, the second hand should indicate whether the Aquaracer is in the morning or afternoon. The morning is 45' and the afternoon is 15'. If you want to add or subtract an hour, press A. The watch will automatically change from A.M. to P.M., and vice versa, if the hands make a complete revolution.

Press B to enter minutes-mode. The second hand should be at 30'. Press A to add a minute. If you change the minutes, the second hand will go to zero. Once you finish your adjustment, push the crown back to a neutral position and screw it into place.

How to Set the Date on a TAG Heuer Aquaracer Watch?

Each Aquaracer model has a perpetual calendar that runs from January 1, 2000, to December 31, 2099. If you want to change the date, press B to enter date-settings. Here, the second hand should move to 55'. Press A to add one year.

Press B to enter the month-setting. The second hand should be at 00'. The left and right counters will indicate the month. Press A to add one month.

Press B again to enter the day-setting. The second hand should be at 05'. The left and right counters will indicate the day. Press A to add one day. Press B to return to time-setting mode.

What Is Calibre 5 in TAG Heuer Watches?

The TAG Heuer Calibre 5 Aquaracer is a form of automatic watch that displays hours, minutes, seconds, and the dates. The model is based on either the ETA 2824-2 or the Sellita SW200. Put another way: there are 25 or 26 frictionless jewels in each Calibre 5 that provide automatic calibration and rapid date correction.

Those with 25 jewels have the ETA 2824-2. Aquaracer's with 26 have Sellita SW200. The bases serve as the core watch's design. Most models feature a nice Cotes de Geneve decoration on the motor with the engraving "TAG Heuer / Calibre 5 / Swiss Made."

Any Aquaracer Calibre 5 guide will also note the differences in rotors. Older models feature solid rotors, while the new version has two triangles cut into the bottom. Regardless of the aesthetic difference, these watch models go through the same endurance tests to provide maximum functionality.

Is the TAG Heuer Aquaracer Waterproof?

Aquaracers might have the most strenuous testing in the industry. The company performs 160 water-resistance tests to make sure you never miss a beat. That includes placing the Aquaracer in broiling heat, salty fogs, and even pressure cookers.

Most dive watches, like the TAG Heuer Calibre 16 Aquaracer, come with a water-resistance rating of 300 meters. These high-pressure models can endure up to 300 atmospheres or 30 bars, which makes it ideal for scuba and deep-sea diving enthusiasts. The only higher certification is an ISO 6425 standard.

Luxury watches tend to hold their value over the decades. These nice models usually have superior design and materials like the ceramic bezel that ensure they function seamlessly, regardless of age. The durability is one of the reasons their watches regularly command price tags over $1,000.

According to the Knight Frank Luxury Investment Index Q1 2017 [R], the average luxury watch appreciates at four percent over the course of a single year. That value is third only to cars and wine, which appreciate at six and 24 percent, respectively. Additionally, watches have the second-lowest price volatility for any investment over a ten year period, except for furniture.

Holding on to a nice luxury watch for a decade will net an average appreciation of 65 percent. This rate is roughly on par with colored diamonds. It also represents a more than doubling in price over its five-year value, which comes in at 26 percent.

Remember, they sell more than Aquaracers. Some of the other popular mid range watches include the Formula 1, Autavia, Carrera, and Monaco. If you are looking for a combination of versatility and value, it is hard to go wrong with a model from the Formula 1 collection, but don’t forget to explore all this high-end brand has to offer.