If you think of prominent watch brands that have made marks in the watch history, you’ll probably hear Hamilton. The company invented the first digital wristwatch and first battery-operated watches, so you could say they have been around for ages.

To purchase a timepiece with great heritage has been one of my goals for so long, considering the watch aficionado that I am. With the kind of history Hamilton company has, I am convinced to look, and probably purchase, at their masterpieces. In this Hamilton watches review, allow me to share my top picks below. 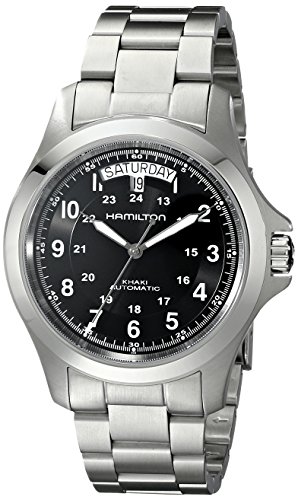 First to be featured on our list of Hamilton watches is the Hamilton Khaki II. You’ll feel like a king (or queen) while wearing this watch with its luxurious look and outstanding features.

Its steel case and bracelet with black dial will justify its elegance. Located in the dial are its luminous hands and hour markers that are sure to give you an easy reading.

This Hamilton watch is more than just an elegant watch with its highly durable scratch-resistant sapphire crystal and water resistant to 50 meters.

Powered by a Hamilton Calibre H-40 that makes use of 25 jewels into the design, Hamilton Khaki King’s rotor now has an H-shaped cut-out in the center. This makes its movement look more modern and chic. I think this is what makes a Khaki King II very lovable. It’s the Hamilton Khaki's design that will surely bring a nice touch to your personal collection. 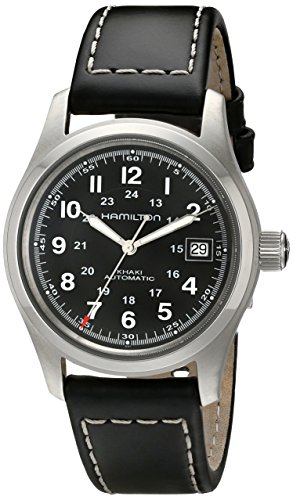 Designed for the outdoorsy and adventurous type of person, the H70455733 Hamilton watch has a very rugged and robust look.

With its sapphire crystal which makes it scratch-resistant and steel case with a leather bracelet, this watch is sure to end up on your wrist anywhere you go.

Moreover, the H70455733 can proudly withstand the waters as it’s suitable for swimming and snorkeling with its water resistance to 100 meters.

The H70455733 doesn’t give its users hard-to-read date and time display with its luminous hands and Arabic numeral hour markers on a contrasting black dial. Minute markers can also be found outside, on the watch’s rim and a date display is also showcased at the 3 o’clock mark. To make things more accurate, the H70455733 runs on a Swiss self-winding automatic movement. 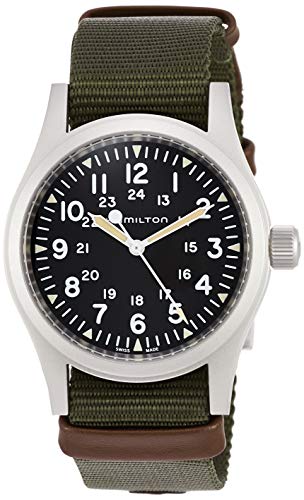 Included in this Hamilton watch evaluation is the Hamilton Khaki H69439931. This silver-toned watch features a round dial with 12 and 24-hour display paired with luminous hands.

Its steel case is combined with an anti-reflective sapphire window which makes it highly scratch resistant.

Completed with green NATO band and buckle closure, the H69439931 is safe to take on your light outdoor activities. It’s resistant only to 50 meters, so the watch is limited only to recreational swimming.

The Hamilton H69439931 runs on a hand-wound mechanical movement which is powered by winding the mainspring within the movement which is usually done using the crown. This means an absence of a rotor, therefore making the watch relatively thinner. Knowing this fact, it is perfect to wear on special occasions and events because of its attractive and timely design. 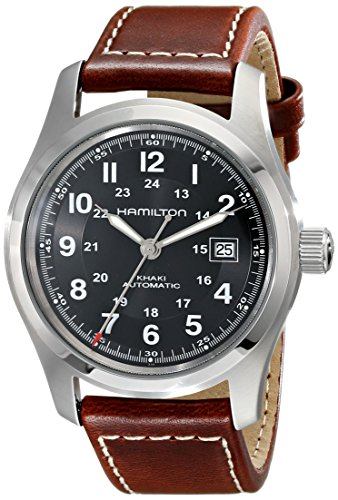 In line with the Khaki Field watches, like the Khaki Aviation, the H70555533 is also a stunner with its combination of chic design and heavy-duty functions.

Conquering mountains and living the outdoor life will be a breeze with this watch. Specifically engineered to withstand the tough life in the field, the H70555533 has a scratch-resistant sapphire crystal window, a steel crown, and a leather band.

Its luminous hands and Arabic hour markers on a dark dial gives you easy timekeeping. It also has a date window at the 3 o’clock mark, just like any Khaki Field watch.

The best thing about this Hamilton watch, in my opinion, is its exclusive H-10 automatic caliber. What this does is it keeps up to 80 hours of power reserve which is especially helpful when you’re out camping in the woods, or trekking through the forest. The H70555533 is made to meet your needs. 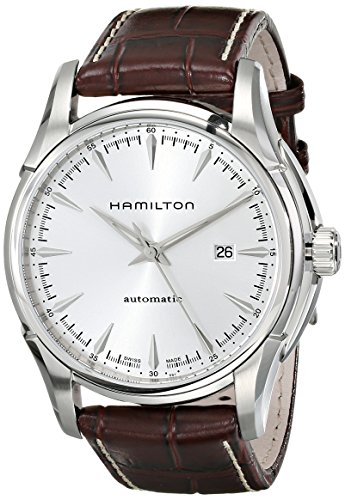 Last but certainly not the least on our list is the Hamilton H32715551 Jazzmaster Viewmatic. At first glance, this is one of the Hamilton watches that will give you a very classy vibe with its stainless steel case and brown leather strap.

Its appearance screams elegance with its sapphire crystal screw-in caseback, with silver-toned dial and indices plus luminous silver hands inside.

Just like the previous watches, it also has a date window at the 3 o’clock position. Don’t be fooled by Jazzmaster's classic appearance as it is tough with its features.

So, you’re probably wondering why it has “Viewmatic” in its name. The H32715551 has an interesting feature that lets you see-through its case back. This lets you have an in-depth view of its automatic movement happening at the back. This watch, like many of the best automatic watches out there, has both a striking front and back view. Elegance and functionality at its finest - this piece can't be missing in any of my watch reviews.

A Hamilton timepiece review would not be complete without knowing its humble beginning and how its brilliance started.

The originally American watch brand was made official in 1892 and made its first watch in 1893. The company occupied the Lancaster factory, which was former homes to three other watch companies. Unlike the previous brands that operated in the factory, Hamilton succeeded. The public admired the Hamilton watches’ accuracy and fine mechanisms and movements. Moreover, Hamilton cleverly marketed their business to the newest American industries, which made a hugely positive outcome to the brand’s name.

Eventually, the company became associated with the American railroads. This greatly made people attached to their service. At that point, there was no standard for timekeeping and accidents were prominent because of the difference between conductor’s pocket watches. This is where Hamilton changed the game, claiming 56% of the railroad community using their watches to get to where they should be on-time safely. This made the Hamilton watch brand release the Railroad Pocket Watch in 1912, making their ties to America’s largest transportation system even stronger.

In 1914, the Hamilton company then made its way to America’s armed forces. Later on, American soldiers noticed a new trend when they arrived in France in 1917. Some watch companies strapped pocket watches to user’s wrist so soldiers could do their job better, and Hamilton took note. Lo and behold, better than the pocket watches, the 981 Wrist Watch was made.

Hamilton accompanied pilots on their first ever airmail delivery. This was in 1918 during the interwar years. Soon after, the American watch company became linked to more dangerous and extreme form of exploration. The need for accuracy on land, air, and sea meant Hamilton watches witnessed action all throughout World War II.

By 1942, the Hamilton watch company decided to focus solely on watches for America’s armed services. However, despite this, Hamilton watches were still considered to be the best when it comes to serving technological war equipment. In 1943, the US Army and Navy honored Hamilton with the “E” Award for excellence.

Fast forwarding to 1957, Hamilton watch company made the Ventura, the world’s first battery-powered watch. Adding to its fame is its appearance on the 1961 film Blue Hawaii, where Elvis Presley personally picked a Hamilton chronometer in this film, rather than picking other watch brands.

By 1960s, things for Hamilton became disruptive. However, in 1966, Hamilton acquired Buren Watch Company of Switzerland, and with it, their micro-rotor. This made way for the production of slimmer Hamilton watches. Also in that same year, Hamilton designed futuristic watches for the film 2001: A Space Odyssey. Later that decade, the Lancaster factory closed.

Hamilton left the American market in 1969, working for a few years with Buren in Switzerland before the company was bought by a company now known as the Swatch Group.

For over six decades, Hamilton watches have made an appearance in more than 450 Hollywood movies, which made Hamilton the movie brand.

What makes a Hamilton outstanding?

If it’s not obvious enough, Hamilton produces the finest and most accurate watches. Hamilton watches have distinct features and characteristics that make it stand out from the rest watch brands in most watch reviews [R].

Evident in most Hamilton watch reviews is its unique designs that are incorporated in each timepiece. Hamilton watches possess a very refined style which surely catches your attention, or it wouldn’t be the perfect accessory for some Hollywood blockbusters in history.

Hamilton watches' designs pay proper homage to the past while utilizing new styles that help bring the brand to the modern age. Its shape and design make Hamilton watches unique and fit everyone’s preference.

The ability of Hamilton to incorporate fashion with precision makes them one of the premier watch companies worldwide.

Hamilton watches do not only have its strong heritage to boast, but it also has its Swiss ETA automatic movements, thanks to their association with the Swatch Group. These high-quality watches will earn your respect accuracy and durability, just like other men's military watches.

Producing the very first battery-operated wristwatch, and a digital wristwatch in 1970, the watch company under Swatch Group is still enhancing its craft and is determined to be the front-runner of watch technology.

Here are the answers to your questions.

Is a Hamilton Watch Worth It?

Hamilton watch is worth it compared to other watch brands due to several factors. Hamilton has been around for over 150 years and started as an American brand. Although it is now under a Swiss Company called Swatch Group, you can see that their designs still shows its American heritage. Today, they also produce highly detailed luxury watches with a touch of Amerian and modern design.

Their ETA automatic and quartz movement for low-budget luxury watches are robust. Depending on your budget, Hamilton also offers high-end luxury watches with better movement, which you can compare with expensive watch brands. With continuous sales, discounts and promotions, Hamilton gives you the best value in the luxury watch category.

Hamilton watches of today are Swiss-made. Hamilton watch brand originated in America in 1893 in which they became known for their pocket watches, mainly used by American soldiers. A lot of acquisitions happened through the years, and Hamilton watch company became a Swiss Company under the Swatch Group. Today, under the Swatch umbrella, Hamilton's headquarters can be found in Bienne, Switzerland, where they manufacture brilliant watches.